A news feature on the Berkeleyside website dated January 26, 2014 discusses a case of hit-and-run that left a victim with serious leg injuries. In car accidents involving pedestrians, those on foot often end up severely injured since they lack proper protection. The article shares a few details regarding the incident:

“Officers responded and arrived on scene within minutes. They found a man injured in the street.

Officers learned the victim had been struck by a car as he walked eastbound across Sacramento in the crosswalk.

The vehicle was described as dull red in color, and a 1960s vintage model, possibly a Mercury Cougar. The driver fled northbound on Sacramento. The car sustained front-end damage in the crash.

The pedestrian suffered major leg injuries and was taken to a local hospital for medical care, said Frankel.

Officers have not yet been able to locate the vehicle, but the investigation is on-going.”

Hit-and-run incidents are some of the more deplorable accidents anyone can experience since perpetrators try to escape out of fear of getting caught with no concern for their victims. Victims of these accidents not only have to survive their injuries but also need to identify the likely culprits. To do this, they can seek the help of a capable Sacramento car accident lawyer to pursue the person liable for the accident. In addition, an attorney acts as their advocate to ensure they are treated fairly by the insurance company. 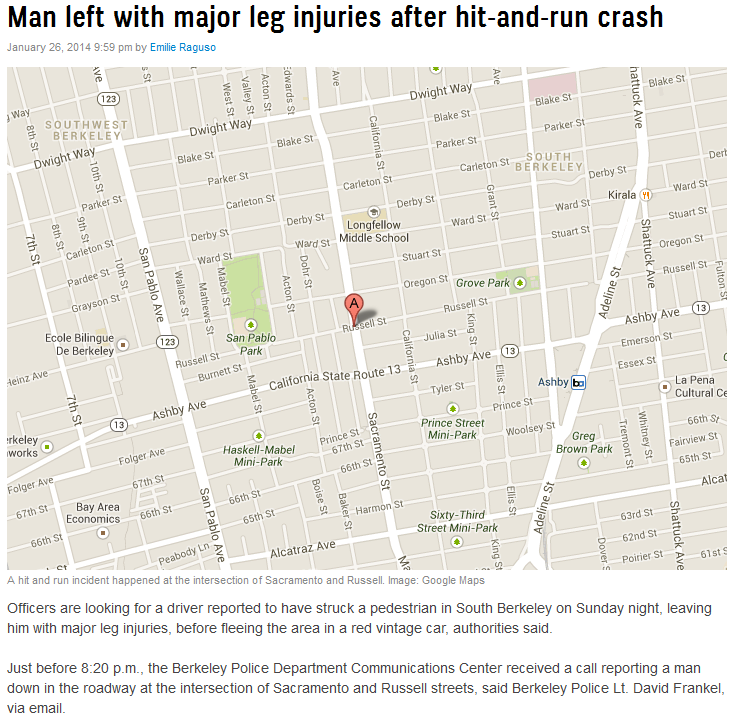 Victims of hit-and-run accidents should make notes as soon as they are can about anything they can remember about the driver. If they are able, they should also try to get the contact information from any witnesses present to recall details of the accident. Such information is extremely helpful when filing an insurance claim. Should their claims be challenged, victims or their relatives will need to secure the services of a knowledgeable Sacramento car accident attorney, like someone from the Carter Wolden Curtis Law Firm, to help them with their claims.