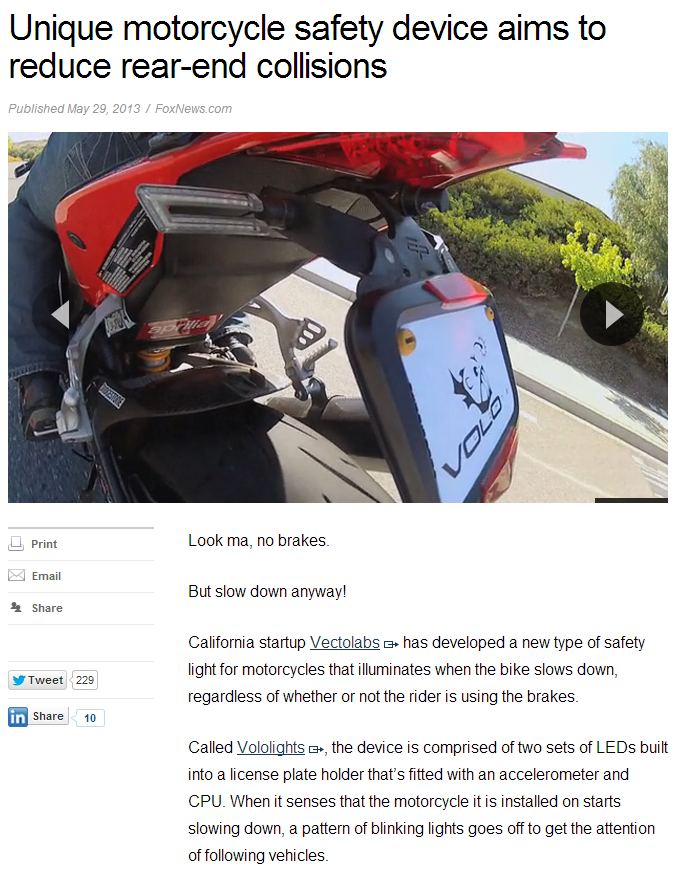 A May 29, 2013 article on the Fox News website unveiled the plans for a new device that’s set to improve motorcycle safety. Dubbed “Vololights,” the device which will be produced by Vectolabs makes a series of LED lights flash when it detects that the motorcycle is slowing down. It is hoped that this technology would become mainstream and eventually help in preventing motorcycle accidents.

Sacramento, and in extension, much of California, is infamous for its number of automobile accidents; it shouldn’t be a surprise, considering the number of high-speed interstate highways and other major roads that run through the area. Motorcycles and their drivers will be even more prone to accidents in such a region, especially since there’s not much between a driver’s head and the pavement other than a mere helmet. No matter how many safety devices the industry comes up with, it’s still recommended that local riders should get to know an experienced Sacramento motorcycle accident lawyer who can assist them legally in the event of a terrible collision.

In terms of deceleration, note that motorcycles can decelerate even faster than regular automobiles and riders typically rely on letting up on the accelerator over using the brakes. Convenient as this may seem, it’s this very habit that poses a risk to both bike rider and car driver, since decelerating in such a way doesn’t cause the rear lights of certain bikes to flash as braking does. This can be misleading to car drivers, who won’t notice the deceleration coming and may unintentionally run over the hapless bike rider.

While latest bike models feature rear lights that flash upon deceleration, most American bikes, especially the older models, don’t include such an option. Vololights are a welcome addition to these old school rides, and even vintage bikes can appreciate such a feature. The device is still in its planning stages, and it’s awaiting the funding of interested folks thorough a Kickstarter campaign.

Until Vololights is mass produced, riders will have to religiously use their brakes along with their deceleration to manually let the rear lights turn on. Basic motorcycle safety gear namely a helmet and a leather jacket can protect riders from trauma and abrasions after falling off their bikes. In preparation for any legal dispute, bikers should also have contact details of a local motorcycle accident attorney from Sacramento, particularly a professional from established law firms like Carter Wolden Curtis, LLP.

It’s precisely because motorcycles work differently than cars that they can be instant catastrophes the moment a person misjudges them. Indeed, it’s a must for riders and drivers to be very careful and vigilant while on the road, anticipating the actions of other motorists and preparing to react to such actions in the safest manner possible. If worse comes to worst, both parties should have lawyers handy to advise them of their rights and obligations.