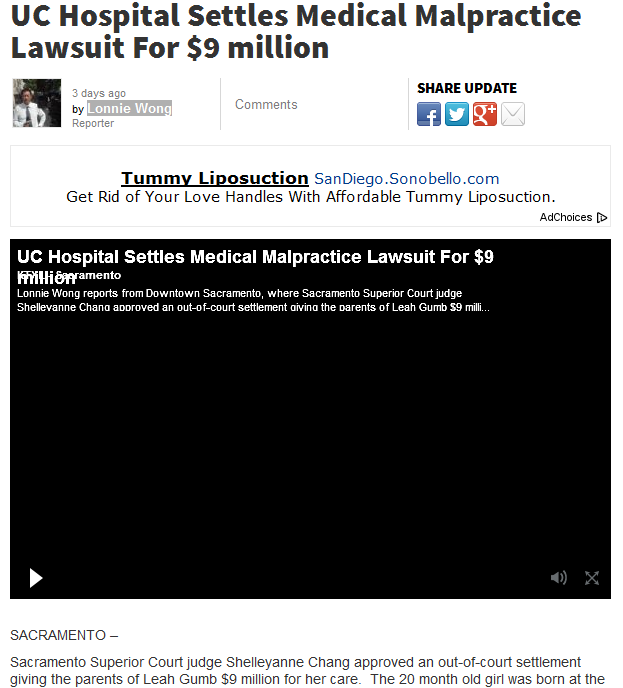 The Sacramento FOX 40 website reports on a local hospital’s settlement with a couple for medical malpractice claims. Jenny Kaminer gave birth to Leah Gumb, who was rendered with permanent brain damage due to the circumstances of her birth. Had the hospital conducted a C-section delivery, the child could have been spared from a crippling fate. Details on the case are as follows:

Kaminer was in labor for 7 hours even though doctors knew that her child was in jeopardy. A C-section would have resulted in a normal birth.  Instead, according to Kaminer’s attorney Tom Alch, doctors were convinced that she strongly opposed the procedure.

“That’s no [sic] true….If at any point they wanted to perform a Cesarian they had my written consent that they could do so,” said Kaminer.

She is still angry at what she says was an attempt to blame her for the botched birth.  She says the expectations of a normal healthy delivery turned into a nightmare.

Doctors might know a thing or two on how to carry out a procedure, but even the most seasoned of medical professionals commit mistakes. Patients turned victims and those surviving them have a right to claim remunerations for the distress they’ve suffered at the hands of their so-called doctors. A knowledgeable Sacramento medical malpractice attorney, like one from the Carter Wolden Curtis Law Firm, should be able to help press such charges.

Being on the receiving end of the wrong medical procedure can be even more dangerous than the ailment being “treated”. Patients have the right to be properly treated, and shouldn’t stand for the mistakes a doctor has committed. Simply put, anytime a doctor breaks the first rule of the Hippocratic Oath, their patients can pursue a medical malpractice charge.

Sacramento citizens filing for malpractice claims will first want to check with California’s statute of limitations before going on with the charges. Afterward, they should consult with a skilled Sacramento medical malpractice lawyer on how to go about the case. Hospitals are sure to put up a staunch defense at court, so plaintiffs will need only the most capable attorneys on their side to win.